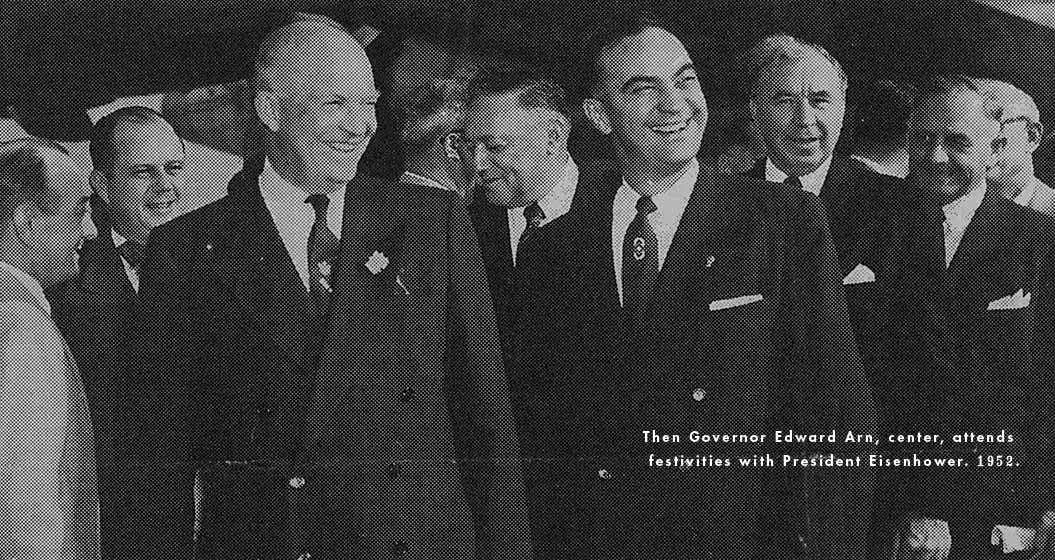 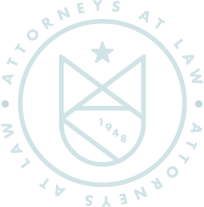 Mr. Arn came to Wichita in 1937 and joined a law firm where he met Richard F. Mullins, who would later become his long time law partner. After he and Mr. Mullins served in the military in World War II they both returned to Wichita and rejoined their old law firm. In 1946 Mr. Arn was elected to the office of the Kansas Attorney General. Mr. Arn was then appointed to the Kansas Supreme Court where he served until 1951 when he was elected the 32nd Governor of the State of Kansas. He later was reelected to his 2nd term and completed that term in 1955. After his 2nd term he returned to Wichita, rejoining Richard F. Mullins and establishing the firm now known as Arn, Mullins, Unruh, Kuhn & Wilson LLP. 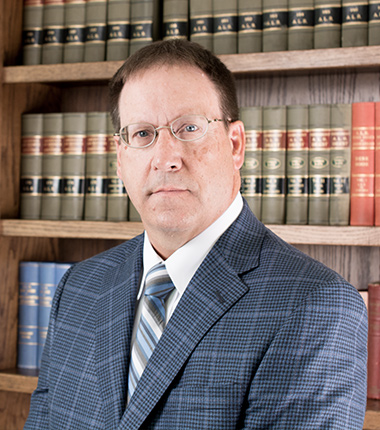 Mr. Unruh began his law career with this firm in 1979 and has earned an “AV” rating from the Martindale Hubbell Law Directory, the highest rating which can be achieved. Mr. Unruh co-authored the law review article “Suppression of In-Court Identification Testimony on the Basis of a Fourth Amendment Violation”, Washburn Law Journal 21-2.

Mr. Unruh has litigated multiple cases in both state and federal courts and has prevailed on both oral arguments and written briefs before the Kansas Appellate Courts. Currently, Mr. Unruh’s practice focuses primarily on corporation and business law, real estate law, estates and employment law. 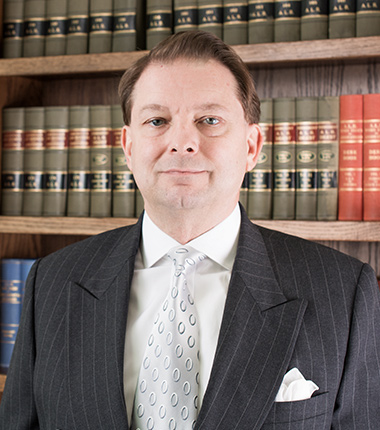 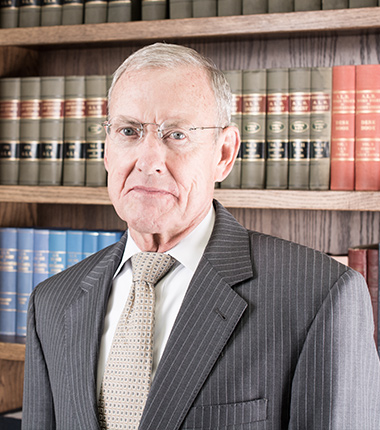 Roger K. Wilson was born in Great Bend, Kansas. Mr. Wilson earned his bachelor’s degree in 1963 at the University of Kansas where he was a member of Sigma Nu fraternity and was active in student school activities including being chairman of the campus political party Vox Populi. He earned his Juris Doctor in 1966 from the University of Kansas law school where he was a member of Phi Delta Phi legal fraternity. Mr. Wilson was admitted to the bar in 1966 and is currently licensed to practice in Kansas State Courts; Federal District Court for the District of Kansas; 10th Circuit Court of Appeals and the United States Supreme Court.

Mr. Wilson began his law career with this firm in 1966 and has earned the Martindale Hubbell Law Directory’s highest “AV” rating.

Mr. Wilson has represented corporate and individual clients since 1966 in the areas of eminent domain, business formations, oil and gas matters, probate, estate planning, trusts, guardianship and conservatorships; family law; and civil litigation; He has been a speaker at probate administration and estate planning seminars.

Mr. Wilson is an Elder at Eastminster Presbyterian Church and Past Chairman of the Sedgwick County Chapter of the March of Dimes. 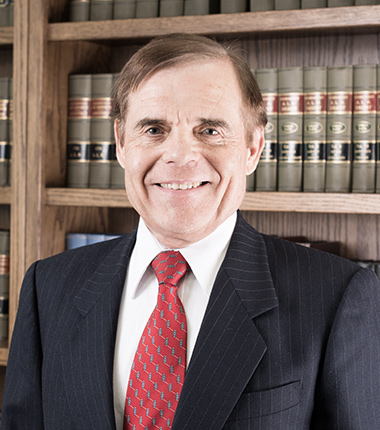 John C. Nodgaard was born in Omaha, Nebraska. He received his Bachelor's Degree in Economics and his Masters of Science in Finance and Accounting with Honors from Wichita State University where he was a member of Omicron Delta Epsilon, Psi Chi and Beta Gamma Sigma honor societies. Mr. Nodgaard was also a member of Kappa Sigma fraternity, where he served as President and Treasurer, and Alpha Kappa Psi, professional business fraternity. He subsequently received his certification as a Certified Public Accountant in Kansas and Oklahoma. He received his legal education at Washburn University of Topeka where he was a Member of the Board of Editors, Washburn Law Journal. Later he earned a Master of Arts in Air and Land Warfare with Honors from the United States Army Command and General Staff College.

Mr. Nodgaard has litigated multiple cases in both state and federal courts and has prevailed on both oral arguments and written briefs before the Kansas Appellate Courts and the Kansas Workers’ Compensation Appeals Board. Currently Mr. Nodgaard’s practice focuses primarily on civil litigation, estates, family law and workers’ compensation. In workers’ compensation he represents claimants, employers, insurance carriers and state insurance funds. He also serves as a Special Administrative Law Judge for the Kansas Division of Workers’ Compensation.

Mr. Nodgaard enlisted in the U.S. Army following high school. After being released from active duty, he continued his military career serving in the U.S. Army Reserve. He received his officer commission in January, 1973. During his military career, he served in Southeast and Southwest Asia and Europe. He is a graduate of the U.S. Army’s Infantry School; Finance School; Adjutant General School; Nuclear, Biological and Chemical Warfare School; United States Department of Defense Defense Information School; and the U.S. Army Command and General Staff College. During his military service he received numerous decorations, award and citations. After 37 years of military service, he retired at the rank of colonel.

Information contained in this website has been prepared by Arn, Mullins, Unruh, Kuhn & Wilson LLP for informational purposes only and is not legal advice. While we welcome inquiries from prospective clients, please do not send us any information that you consider to be confidential until you have made specific arrangements with us to become a client. Neither your sending us information electronically nor our receipt of information from prospective clients creates an attorney-client relationship between Arn, Mullins, Unruh, Kuhn & Wilson LLP and the sender of such information. Our attorneys are only licensed to practice law in Kansas and our posting this website and including information about our firm and its lawyers is not intended to be, and should not be construed as, any form of advertising or solicitation to perform legal services in any jurisdiction where we are not authorized to practice law.

CONFIDENTIALITY NOTICE: This message is covered by the Electronic Communications Privacy Act, Title 18, United States Code, §§ 2510-2521. This E-mail, along with any documents, files, or attachments, are copyrighted and are proprietary products of Arn, Mullins, Unruh, Kuhn & Wilson LLP and may contain information that is confidential, privileged, or otherwise protected from disclosure. Any unauthorized use, reproduction, dissemination or transfer of this message or attachments, in any medium whatsoever, is strictly prohibited. If you are not the intended recipient, you are hereby notified that any disclosure, copying, printing, reading, distribution or use of any information contained in or attached to this E-mail is STRICTLY PROHIBITED. If you received this E-mail in error, please immediately notify the Firm by E-mail and telephone 316-267-5267, and destroy the original E-mail and its attachments, without reading, printing, or saving it in any manner. Your cooperation is appreciated. There is no intent, express and/or implied, on the part of the sender to waive any evidentiary or other common law privilege (including the attorney-client privilege) that may attach to this communication.

PLEASE NOTE: (1) Unencrypted E-mail communication is not a secure method of communication, (2) any E-mail that is sent to you or by you may be copied and held by various routers, servers, internet service providers and/or computers that it passes through as it goes from the Firm to you or vice versa, (3) persons and/or entities not participating in our communication may intercept our communications by improperly and illegally accessing your computer or our computer(s) or even some computer/server unconnected to either of us which the E-mail passed through. We are communicating to you via E-mail because you have consented to receive communications via this medium. If you change your mind and want future communications to be sent in a different manner and/or method, please so advise us, in writing, as soon as possible.